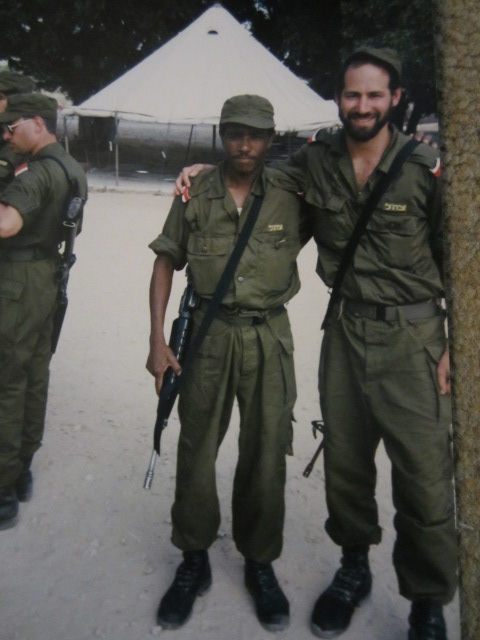 This morning I found the newspaper on my desk, kindly put there by the Pilates instructor who comes in at this early hour. I had my morning planed already, I was going to read about Herod and Pompey, but the headlines shook me.

The cover of the paper was all red, stabbings, two soldiers hospitalized; only by a miracle are they still alive. The cabinet of our little town met for an emergency meeting. What happened?

At the early hours three soldiers, home from active duty, went to buy some groceries. As they came back to their car they saw that a teenager who broke their windshield wipers and was messing with the car. "A fight broke out", the teen pulled out a knife and managed to cut up two of the soldiers quite badly. Those are the only details provided.

What kind of an attack was it? – They did not say. But, we can learn some lessons from this case any way.

People abroad speak of "military Krav Maga", they want to learn Krav Maga the way it is done in the IDF. They want instructors "Certified by the IDF" or by the Israeli government.

What can I say? In a word this is all nonsense. Worse – they are endangering people's lives.

OK, I have already stated; the IDF Krav Maga course is 3 weeks long. Yes, you go from a novice to an instructor in three weeks. Next, in a combat situation the policy is simply to shoot the terrorist with your M 16 or Tavor. Most civilians don't have this option. However in this case it was not an Arab terrorist but a drunken Israeli teen, and, sorry for not being politically correct but it is not policy to shoot drunken teens.

Now, if you buy into the myth of "Military Krav Maga", then how come three soldiers could not overcome one teenager? The answer is that very little time is devoted to Krav Maga in the army, even less time is devoted to knife attacks or knife threats, and very few soldiers become even mildly proficient in Krav Maga.

Bottom line: if you want to learn Krav Maga you must find a non-Military commercial Krav Maga instructor with a great deal of experience.

When I look at video clips of other Krav Maga associations, I still am amazed by the flashy Jujitsu type disarms, wrist grabs and twists, flipping people around, and I ask myself; where are these people living?

(In Israel we have an expression; you are living in the movies). Now I know that many of these instructors come from Israel and I have no explanation for why they teach this way.

When I think of last nights' stabbings, how three IDF soldiers were attacked by one drunken teen and how they were not able to stop him – I am reinforced in my conviction that we must keep our knife defenses simple and realistic. We must train full force with protective gear. We must be humble enough to realize the truth – that knife attacks are very difficult to block, that disarms are incidental if not accidental and nearly impossible to execute, that we must keep reality in our minds at all times.

Many instructors "love their techniques too much", they cannot accept change. They cannot admit to their students that certain techniques belong to the past and must be disregarded. This is ego and there is no place for ego when lives are on the line.

Sometimes a past student comes to visit. Perhaps he trained years ago, then was drafted, went to college, and now comes in for a visit. He does a knife defense and I say, "Sorry, we don't do that one anymore."

He seems confused; after all I am the one who taught him this technique, what am I saying? I am saying that we have found a better way and it is time to let go of the past.

When I think back to my black belt test, which was very challenging, I can say that today we use none of those knife defenses, not a single one is still in use. They are in our Krav Maga museum. And I was taught by one of the most renowned Military Krav Maga instructors in the world!

Krav Maga is common sense. We have no gurus, we don't care about lineage, we care about survival. And when I read the morning paper and see the blood stained shirts I ask myself – What can I do to make our Krav Maga more effective? Nothing else matters.

I will leave the fancy stuff to the "you tube masters".