The Reality of the Knife
By Moshe Katz, Krav Maga Instructor, Israel

A real blade is really dangerous, never forget this.

I am still amazed at how casually some martial arts instructors treat knife defense. In their training against knife attacks they seem to feel like they are a combination of the best of Bruce Lee, Chunk Norris and Steven Seagal all rolled into one. But even those guys could only do this stuff on the movie screen.

I have come to learn the reality of the knife, the blade, the sharp edged weapon, and it is evil and deadly. It will cut you coming and going, it will cut you up and down. Your well toned muscular body is no match for the knife. Until you understand this point you are not ready to begin your training.

As such our goal is always the same: Disengage as quickly as possible. Get away from that blade.

On the DVD (produced in Germany by Mario Masberg a few years ago) I demonstrate a Krav Maga defense vs an "Ice pick" style attack. The first part of the defense has become fairly common among the different Krav Maga associations as thankfully the more absurd defenses have been dropped.

On this DVD I show six possible follow-ups to the "Bursting Defense", the sixth, and my least favorite, is the only one that involves trapping the knife.

I no longer teach this defense as a standard, I only use it for very specific situations, which I will soon describe.

I have dropped this technique, which was taught to me by my teacher.

In a word; it is unlikely to work and will most likely get you killed. I shall explain.

1.    Having observed students over the past thirty plus years I see that most miss the point here. Note what I wrote earlier, but this time with two words stressed in italics.

What in fact I see most often is that in their rush to wrap the arm they do not do an effective block. They sort of slip over the attackers' arm rather than solidly block it. As such they have not neutralized the enemy in any way. The attacker/aggressor/assailant, is not hurt. When the Krav Maga student attempts to do this wrap around the arm of the resisting opponent he will find, as we have in countless experiments, that the opponent will pull his arm back while cutting our Krav Maga student.

The Attacker then continues with a series of deadly thrusts and stabs. I have seen this happen again and again. Those who doubt this are soon converted to our way of thinking. "Oh yeah, I see this now..hmm."

2. My first point dealt with how most students will develop bad habits and not do the technique properly. And as it says in the Karate Kid, "No such thing as bad student, only bad teacher." I interpret this to mean that if I see that most students are not easily "getting it", then I must drop or adapt the technique. Our philosophy is that Krav Maga must be easy to learn. We are not talking about learning to be a concert violinist, only for the elite few, but for street or home survival, which is for everyone.

But even if students and teachers were able to do this correctly, there is still a problem. There are too many things that can go wrong, too many steps, too many components. I advocate Hit and Run and Disengage. Do not stay with this violent knife wielding attacker one split second longer than you have to! But what are we doing here; blocking, wrapping, pulling...every additional millisecond brings with it the great danger of the attacker recovering and stabbing us to death. In reality terms - it is just too difficult to pull off effectively. It is too risky.

However, there is a time and a place for it; in very confined places. 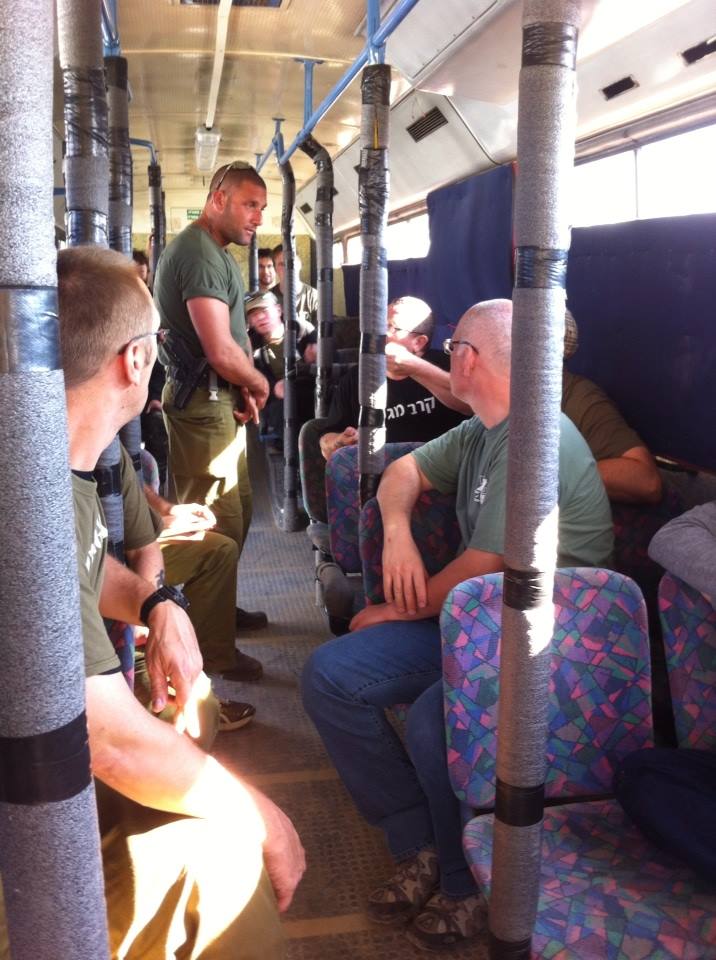 Tour and Train November 2013, realistic bus scenario with a suspect terrorist. Upcoming Tour and Train sessions in March and June 2014.

In a very confined space you cannot hit and run, there is simply no place to run. This could be in an elevator, on a bus, on a plane. Only in such a situation do we use this forward moving block and wrap type of move. When there is a wall to push the person into it is possible to use that to our advantage. Slam the person against the wall and then control their arm. Otherwise...too risky.

At IKI Krav Maga we are always reevaluating our approach, our strategies and techniques. What we used yesterday is not necessarily what we use today. That is why we have our On Line program where our students/instructors/members daily receive updates on what we are doing here in Israel. If there is a new development - you will get it very soon. If you have a question, a doubt, a new situation; write us and we shall respond.

Krav On Line
Never be teaching or learning Yesterday's Krav

Do not be teaching Yesterdays' Krav Maga. Stay on the cutting edge of Israeli Krav Maga. Join Krav On Line today.

The fastest way to improve your Krav Maga? Come to Israel! Spend a week or two immersing yourself in Krav Maga and Israeli culture. Start from the beginning, step by step and learn how simple and how effective Krav Maga can be.

November 2014 (exact dates to be announced)