As I go through difficult times many lessons from the past come to life. Certainly our Jewish history is filled with stories of setbacks and recovery. Perhaps no other people has such a history.

We lost everything. We lost our Temple, our independence, our freedom, and our country. Many of our people lost their religion as both Christians and Muslims gave us the choice, "Convert or die".

And yet we are here today, prouder and stronger than ever, and of course this angers those who sought to destroy us. They hit us with their best shot and yet we came back. And this explains all the "Anti Israel" feeling today. It is not a "disagreement over policy" it is a hatred that goes back many centuries.

But it is also our personal history. I am named for my grandfather Moe, a man who struggled his entire life, which was brief, worked hard and died young.

His brother, Uncle Seymour, outlived him by many years and was as close as I had to a grandfather. (on my father's side).

As I go through difficult times I think of my father. I have this image in my head. He was telling me about Grandpa Moe and Uncle Seymour, two wonderful brothers who loved each other very much.

Times were tough for them.

Money for an important family event was hard to find.

I have this image from the story, the two Katz brothers, may they rest in peace, walking back and forth up the block in Brooklyn. It is night. The Katz brothers are walking and talking, trying to beat the money game, find a solution, figure it out.

They walk to the end of the block, they turn around and go back. Again and again. Talking, brain storming. Two brothers trying to cope with the challenges of life, the streets of Brooklyn, mid 1950's.

I returned to those streets, lived on Ave M, my grandfather had lived on Ave N. Perhaps we need to relive the past a little.

My uncle became a rich man, lost it all, and then built it up again. Rest in peace dear Uncle Seymour, you are an inspiration to me.

The Katz men have always been fighters, in every sense. Grandpa Moe was a fierce Zionist, fighting a Public Relations battle for the creation of the State of Israel and raising money.

Not being a rich man himself, he never owned a car or a house, he raised money from others. My dad, rest his soul, said Moe Katz went from house to house collecting money for Israel. And as Dad said, he became quite unpopular in some circles, but he did not care. The cause was greater.

Such was his life, devoted to his ideals, hard work and many setbacks. But the difficulties never stopped him. 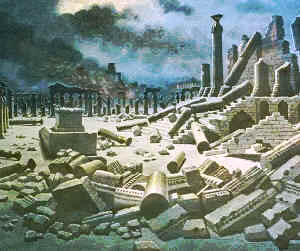 Illustration, the Temple destroyed, Jerusalem the holy city in ruins.

I have this other image in my head, an historical image, one which I have never seen. It is Jerusalem, just after the destruction of the year 70. Even today, when you come to Israel I will show you, you can see the ruins of Jerusalem. Many of the great stones rest today exactly as they were in the year 70, the moment they fell down from the Holy Temple. That moment was frozen in time. The destruction remains, even as we rebuilt our national life.

But somehow I can see it, I don't know how. And I can feel it.

The hopelessness beyond words. A few scattered Jews, Hebrews, remnants of a great nation. They see their great Holy Temple in ruins, most of their friends and family are dead and they are destined to be sold as slaves in Rome, so far far away.

Imagine what they were feeling.

Imagine that it would be nearly two thousand years before they would return home. 2,000 years in which they would experience every horror known to man, the massacres, inquisitions, pogroms, farhud, and Holocaust.

And yet, they did not give up. Could they have imagined what they would go through?

By the rivers of Babylon we sat as we remembered Zion, Jerusalem, our city.

But we never gave up.

We never gave up.

And the two Katz brothers of Brooklyn, NY, pacing back and forth, for hours, in Flatbush, Brooklyn, at night.

Israel: A Nation of Warriors
History of a Fighting Nation
eBook
By Moshe Katz

What makes Israel Unique? History of a warrior nation. Discover the fighting spirit of Israel.