Visit to Kazakhstan 2010
By Moshe Katz

I had no idea what to expect, in fact many friends had expressed concern over my decision to visit this far away land called Kazakhstan.

I was greeted at the airport at 6:30 am by Anvar, the business manager of the Battler Center. He brought me to the beautiful Tien Shan hotel near the center. After a much needed nap we headed out to visit the Chabad Center of Kazakhstan, the center for Jewish life in this region. 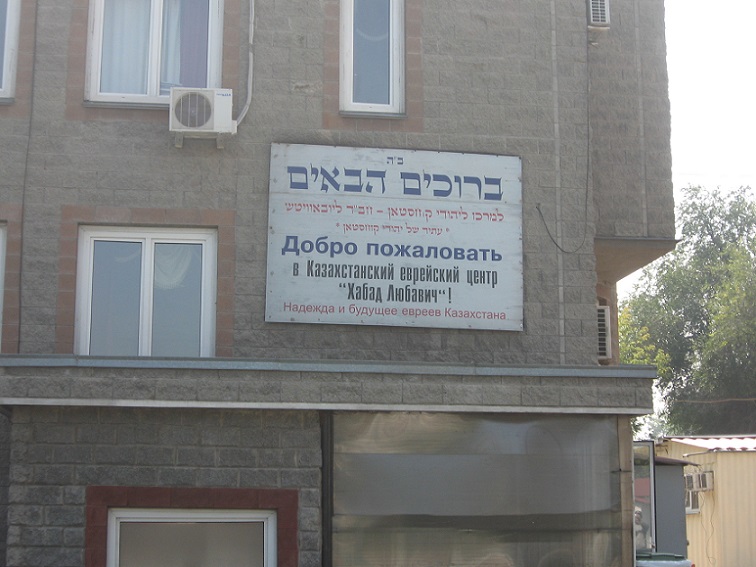 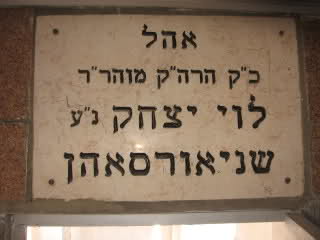 His holy honor, our teacher, the rabbi, Levi Yitzchok Shneerson 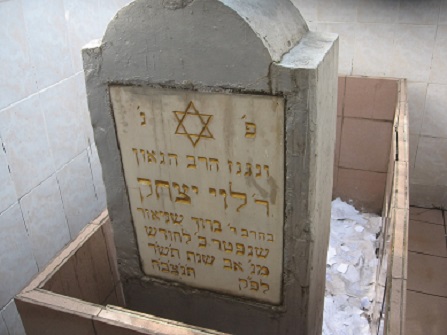 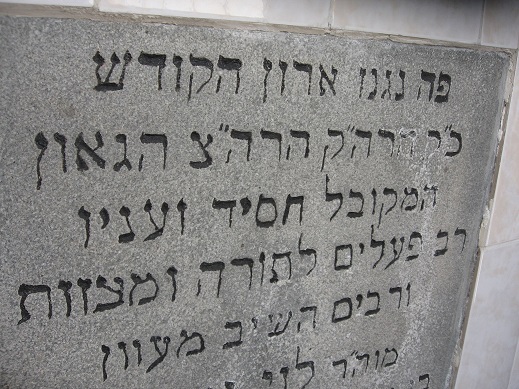 I met the rabbi, from Jerusalem, who greeted me warmly. After a friendly chat, Ze'ev, one of the congregants, took me to the old cemetery so I could visit and pay my respects to the famed Rabbi Levi Yitzchok Schneerson.

A great man in his own right he is also known for being the father of the late Lubavitcher Rebbe of Brooklyn, New York. 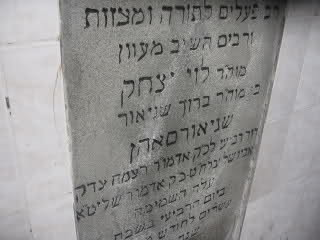 At the cemetery I also saw many old, somewhat neglected, Jewish graves, a sign of a religious community that once lived here. The writings on the tombstones indicated that these were devoutly religious Jews. 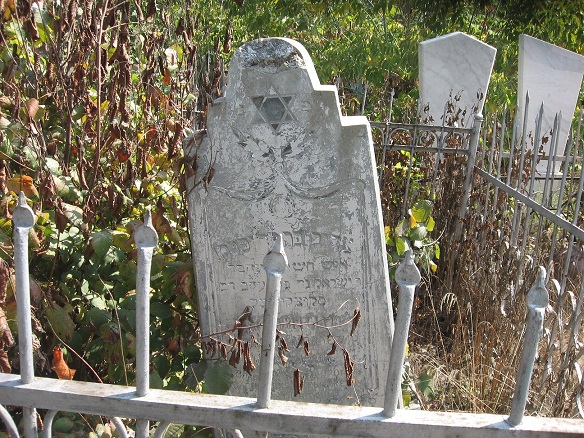 photos: graves of pious Jews who lived in Almaty 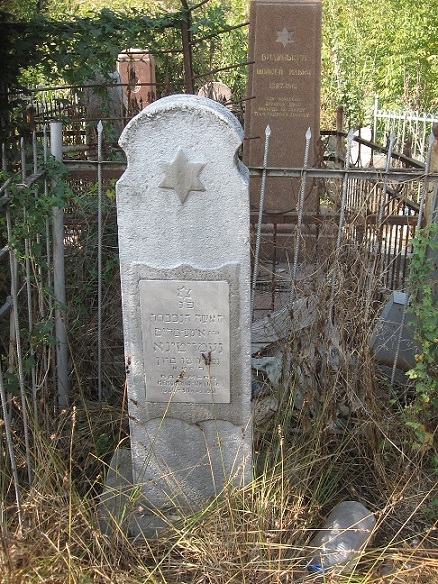 We proceeded to the center where I met Nurlan, the owner and the visionary of the Battler Center. Over the next few days his kindness, modesty, generosity and warmth would greatly impress me.

Soon I met the instructors I would be training: Vadim, Igor, Oksana, Maxim, Sacha. Anvar, the business manager, translator and my personal companion for the trip, would be the sixth man for the training. 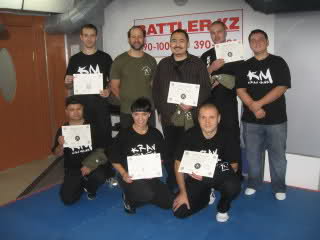 We worked hard all day, had a brief coffee break in the morning and a nice lunch break. Otherwise it was pretty much 9 am to 9 pm.

During the lunch breaks Nurlan and Anvar showed me some of their city, Almaty. I came knowing very little and really expected to find a backward, primitive city. Instead I found a modern beautiful city, well dressed people, modern luxury cars, international banking services. In my mind I pictured being picked up at the airport in a jeep by a few people carrying Kalashnikov rifles. In actually I never saw a gun in Almaty except for the realistic looking training guns in the gym.

I imagined that finding kosher food would be impossible, but luck, or heaven, was on my side. First we did some shopping at the Chabad center. Ruti, who spent several years in Israel, works in a restaurant and prepared for me a special kosher meal. She cooked it herself and made sure it adhered to the highest standards. She herself is a member of Chabad. The next day we eat at a restaurant owned by her sister, she came and prepared another lunch especially for me.

The office staff at the center; Tanya, Yulia and Dinara, were very kind, taking care of me throughout my trip, running to get me coffee or whatever I wanted.

In terms of danger I found this to be one of the safest places I have ever been to. The rabbi told me, "There is no Anti Semitism".

I found Almaty to be a wonderful place. 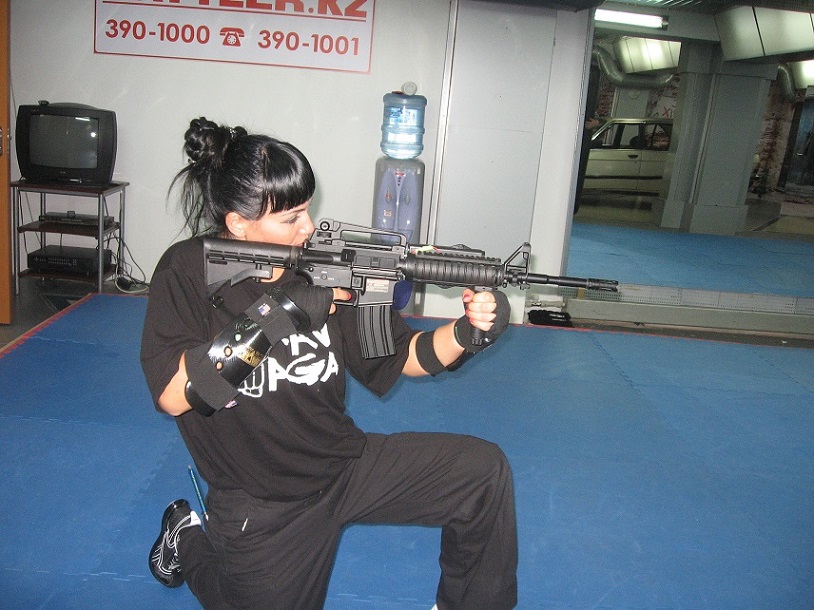 Oksana, typical Kazakh woman. Actually no one walks around with weapons, unlike Israel. This is a training weapon

I found the instructors, Vadim, Igor, Oksana, Sacha, and Maxim to be very hard working and disciplined. They were given a choice to be part of IKI or to remain with the organizations that previously certified them in Krav Maga. They all freely chose IKI. I am proud to have them as instructors in our system. They are now all Instructors.

I was also able to observe them in action as teachers, and I was very impressed by their dedciation and care for their students. They are passionate about their work.

All in all they are a great team: Nurlan, Anvar, the office women, and the instructors, and the camera men too! 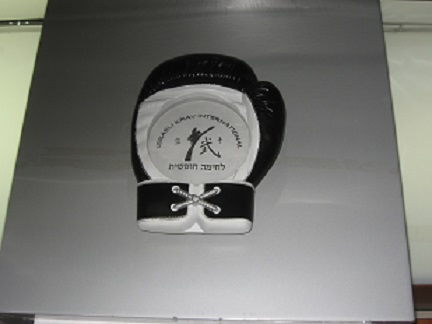 Our logo on display at the Battler Center in Kazakhstan