The issue seems to come up now and then. People write me or ask about "Military Krav Maga" or being "IDF Certified" (IDF - Israel Defense Forces). Often people will write, "I am already a great master but now to be certified as a military Krav Maga expert as well." These six blogs will hopefully set people straight; there is no such thing as Military Krav Maga, there is only Krav Maga, and it can be applied many different situations and circumstances.

I guess it makes sense that if you live outside of Israel, and are unfamiliar with Israeli life and culture, that you might come to the conclusion that being "IDF certified" in Krav Maga makes you the "cream de la cream"; the best of the best.

Sadly, this is not even close to the truth, and in fact is closer to being the opposite.

I know there are people who cling to myths. For many kids it is difficult to let go Santa Claus, (and for adults to discover the truth behind the legend). For many adults there are still "super heroes", and for some the Israeli Rambo is a very real creature.

We do have super heroes in Israel. I write about them in my book, "Israel: A Nation of Warriors", but they are regular people who do super things. They are not the Israeli version of the Ninja myth. (whoops, are there people who still believe that one??)

But as they say in Israel, "You live in the movies" (ata hai be seret) along with Jennifer Lopez and that other woman, angalia something).

The IDF does not produce super-human-Krav-Ninjas. But Israeli society does produce a great people devoted to survival. (again, all this is great detail in book, see below).

I do not mean to put down any IDF soldier, never! Anyone who served his country is worthy of praise and our unending appreciation. Simply put; we owe our lives to our soldiers. We must never forget this. However, for the sake of clarity, it is important to explain what the terms mean.

All my information comes directly from the source; soldiers who have taken the Krav Maga course, observed the courses, active and past soldiers who know what they are talking about.

For 20 years I have been teaching Israeli kids, they all serve in the army, and they come back to me with their impressions. Of course I also have many friends and family who serve.

Most Krav Maga courses in the IDF are three weeks long. They are not more intensive than other military courses, they do not push you to super human limits (despite the claims made by some former IDF instructors who want their foreign students to believe they have achieved the super human. No, those instructors are not expected to go without food or sleep. They work and train regular hours. Enough fantasy stories.

The participants in these course are not considered "Combatants" or "fighters" on the same line as workers, instructors, etc. 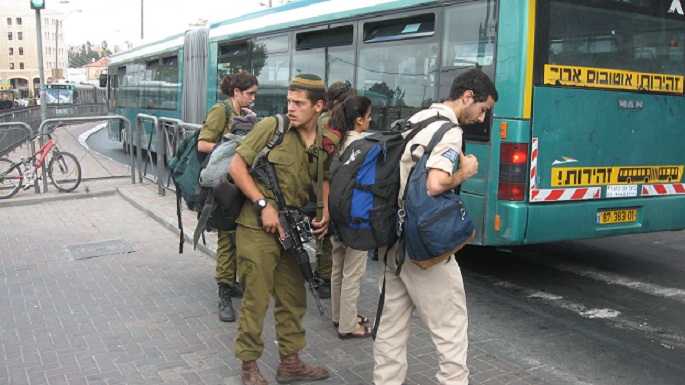 Guns are everywhere. Jerusalem Bus Stop.  The emphasis in the military is on guns, not Krav Maga.

These soldiers in the Krav Maga courses can go home for long weekends, sometimes even for the nigh. Again, nothing wrong with that. Fitness instructors also go home for long weekends, as they say here; each one and his job. Every job is important; both the cook in the kitchen and super commando, all serve a purpose and all contribute to our safety.

A relative of mine, who was a commander in an elite combat unit for many years ( and still is in the reserves), said, "I have met only one quality Krav Maga instructor in the IDF during my entire career. You have to understand the role of Krav Maga in the army, it is minor."

"Krav Maga is not as serious as learning to shoot, or driving a tank, or strategy. As such it is not regard with such high importance.

Most of the training in the instructor course involves teaching how to maintain discipline, very little time is devoted to technique. And when they finally do get to technique t is mostly how to use the rifle as a blunt weapons. After that they learn some basic punching. As such very few of the instructors ever reach a high level, and those that do are the ones who came with previous experience."

"Sometimes I would watch the Krav Maga class and all they were doing was playing "capture the flag", it is not like the way you (Moshe) teach. Much of the training involves building team spirit." 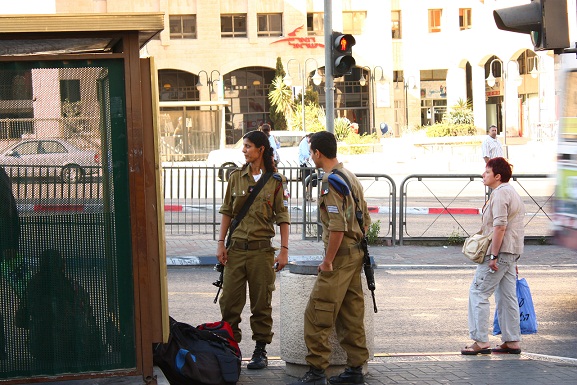 Bus stop, male and female soldiers with rifles. It is the Rifle, not the fist, that symbolizes the Military.

I believe those are very wise words.

Always remember your goals; is it to add a cool photo to your collection and a "celeb" name to your resume, or is it to actually learn to defend yourself?

Israel, Krav Maga, the Bible, the Israel Defense Forces, and the connection between them. What makes Israel unique?

or directly from IKI