New York City, some love it, some fear it. For me it holds a special place in my memory, of mix feelings and experiences. As a stranger, an outsider, an out-of-towner, walking the streets night after night, for school, for work, for martial arts training. Endless waiting at cross roads, always on my feet it seems, walking long distances. I prefer the above ground rather than the trains, the subways, that is a whole other experience.. But of course on a daily basis I also descended to the subway and the underground culture, almost a city under a city with a life, smell, and culture of its own.

I have images in my head, in my eyes, moving photographs. I see immigrants of all sorts, trying to make a living, the conditions are harsh. I see a Chinese man at the end of the day dumping a bucket out into the street outside a restaurant. I see him washing off the sidewalk, the sign that another day of work has come to an end. I see a woman making some sort of dumplings pastry. An African man is loading a truck, another is pushing a cart full of clothing. Merchandise is everywhere. Everyone is working hard.

I see people hawking their wares to the passersby's. I see a man sitting quietly and peacefully next to a table filled with umbrellas and wallets. He appears forlorn, accepting whatever fate the passersby's decree for him today. I see Koreans, Indians, Pakistanis, Chinese, Israelis far from home, Spanish speakers, Russians and Ukrainians. All trying to eek out a living from the bustling life of the city.

All are far from home, hoping for a better life in America. As it was a hundred years ago when my relatives arrived here, it is today, only the groups change. I see a group of Asian men sitting outside a restaurant in their aprons, clearly after a long hard day of work, chatting and laughing in their language, a feeling of camaraderie, a feeling of home.

I too am far from home, here to seek an education and perhaps a small fortune. I walk the streets, I see them all, their faces, their expressions, their yearnings, their dreams. So far from home...hoping for something more out of life. I stop in to a Korean food place to get my usual make it yourself salad. The place is family owned, open all hours of the day and night, always another family member. Working hard. I pick up the Wall Street Journal from an Indian owned news stand. They too are open round the clock, Hard working people. We are all different, we are all the same. I smile, they smile back, a silent exchange. I continue on my solitary path in the night.

The cold of night, the descending darkness, the uncertainly of each corner I turn. I see a woman walking by, so well dressed but alone, I wonder what she is thinking. Perhaps she just finished a long day at the office, perhaps she is on the way to meet someone; her scarf is wrapped tightly around her face, she is looking down, avoiding the chill of night on her face. Everyone is walking so fast, I am taking my time, the walk of darkness, of night, of contemplation. At home there is no one but the four walls, so there is no rush. The streets are filled with life, but is it really life or just a bunch of lonely people in the same place, quickly passing each other by with barely a glance.

A street hustler is trying to get me to join a game of cards, a woman asks me if I want a "date", another hands me a flyer for a gentleman's' club, and yet another opens his jacket to reveal a nice collection of "quality" watches, New York City at night...

I see a sign, Kung Fu - Chinese martial arts. I make a note of the address and enter the building. Almost in a world of their own a group of mostly men practice an ancient art. I am allowed to observe. During the course of my time in New York City I will visit and train at many such centers. I will experience many martial arts. Most are in poorly lit locations, old buildings, the third floor or the basement. The students are very dedicated. The groups are usually small.

These are no frills operations, the students came to train. It is late at night, after a long day of work. It seems as each one has brought a traditional art from his homeland. Downstairs, there are restaurants with the cuisine of each nation, but here, in these run down locations, are the traditional martial arts of these lands.

I train with a guy named Vladimir, some Russian style of fighting. Another night it is a form of Chinse Wu Wei Gung Fu, another night it is Chen Tai Chi Chuan, Filipino kali stick fighting, Indonesian Pentjak silat.  It is a multi cultural journey of martial arts, of life. It is like a secret city within the city, behind closed doors, down a rickety stairway, through a locked door entered only with a code. A secret society of warriors.

One night I see a man working on the Wooden Dummy (Chinese training device made of hardwood), he notices me and we chat. He invites me to join him for training. He is a tall black fellow, Sifu Maurice Llewellyn, a Wing Chun master. I am training in Wing Chun with Sifu Chun Kwok Chow, and we discuss and compare. He is a two time Australian full contact champion. We talk, we train, become friends. He invites me to join him again for training at this location. His speed impressed me, till this very day I use some of the tips that he offered me, one martial artist to another. Two solitary figures training late at night, trying to get closer to some unknown truth.

I return to the streets, as the night darkens they are full of mystique and danger. I walk alone, aware always but somehow at peace with myself, with the world, with the loneliness, I am secure. A feeling of tranquility embraces me. My world is at peace. I feel a protective shield around me as I walk the streets, my feet feeling the ground. A day would come, far off in the future at this point, when all these martial arts and life experiences would coalesce into IKI Krav Maga Self Defense system; from walking alone, the streets of New York City, to the stages of the world and large international seminars. I did not know this at the time, I only knew that I wanted to train, to learn, to experience, to grow. To become.

There would be training at the Oyama dojo under Saiko Shihan Shigeru Oyama, training with Kru Phil Nurse, Muay Thai champion, training so brutal I could hardly cross the street after the session. There would be full contact Kyokushin Karate, Seido Karate (Tadashi Nakamura), boxing on Chambers street, and Vee Arnis Jujitsu with Master David James, training with the Guardian Angels and so many other forms. There would be a few hospital visits in the middle of the night, St Luke, Roosevelt hospital on W 57th Street , St Vincent's' in Greenwich village...

New York City, and the secret city within the city. I have never seen a Broadway show, or been to a nightclub or any of the other attractions New York is known for, but I did experience the beat and breath of the city and the inner world of martial arts. Each door, each cramped smelly dressing room, each brutal full contact class, left its impression.

Walking to the subway station, worn out but satisfied, a new lesson, another step, the long ride home on the F train or the D train, later on the 1 train or the 3 train, Uptown, Downtown, often standing and hoping that at the next station a seat would open up...the journey. And I can still feel the cool breeze of the night, the chill of Manhattan...New York City at night. 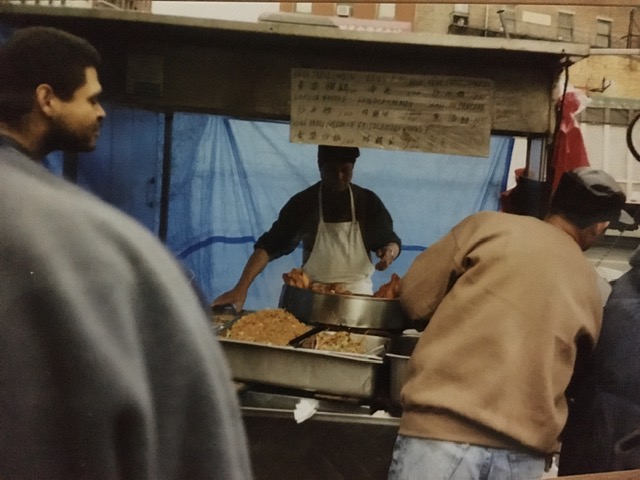 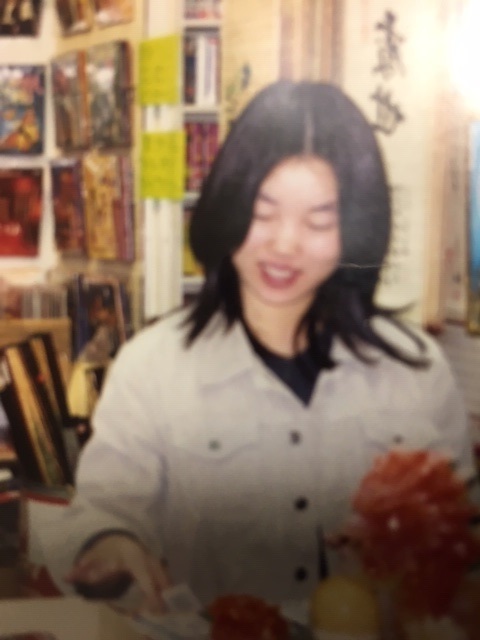 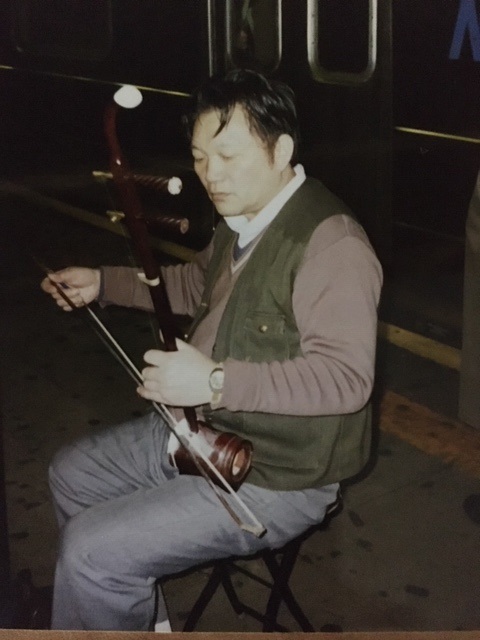 Chinese man playing his traditional instrument on the subway, trying to make a living. Everyone of us carries his home with him 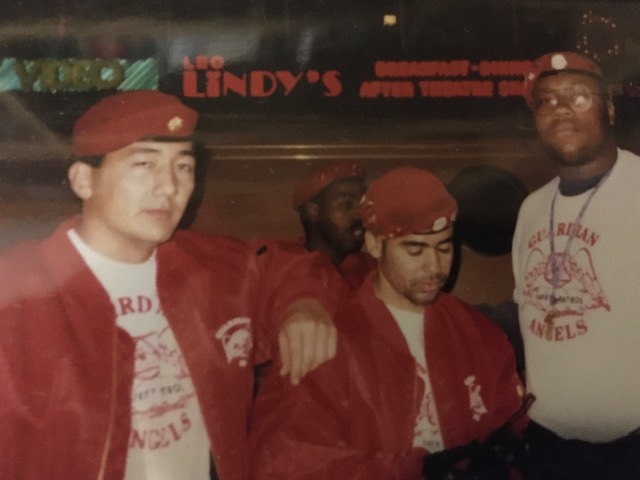 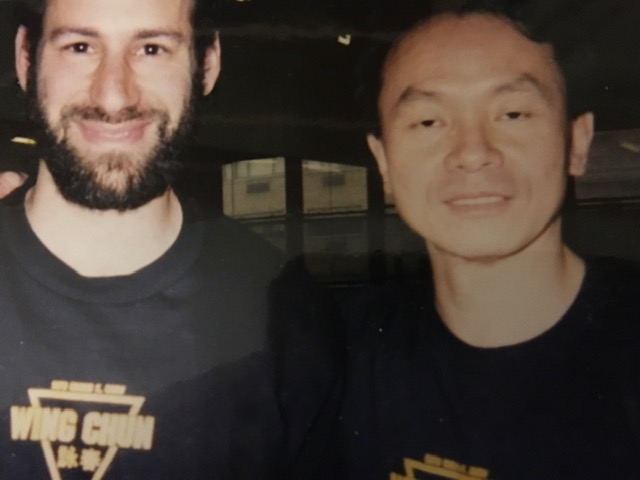 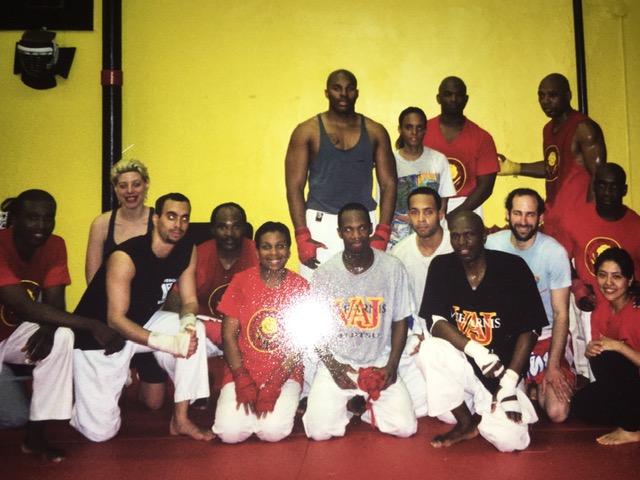 With David James and some of the group at V Arnis Jujitsu, lower Manhattan. 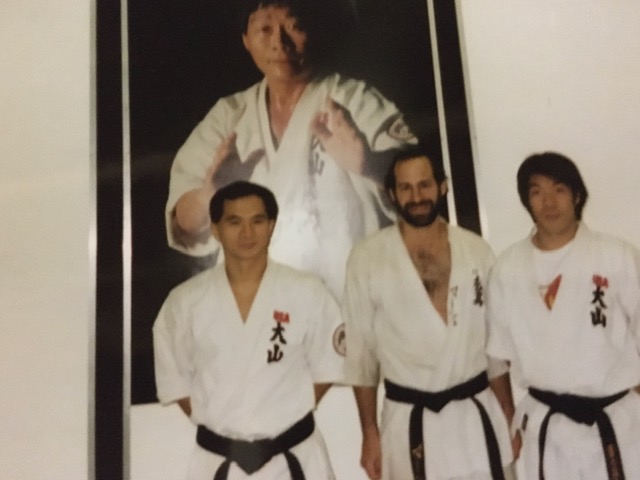 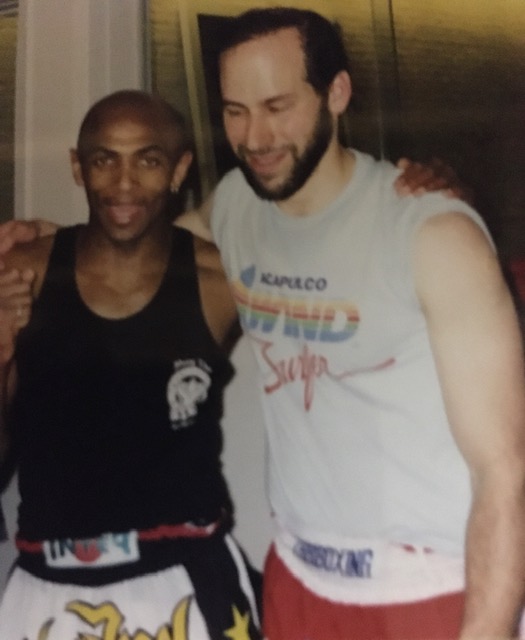 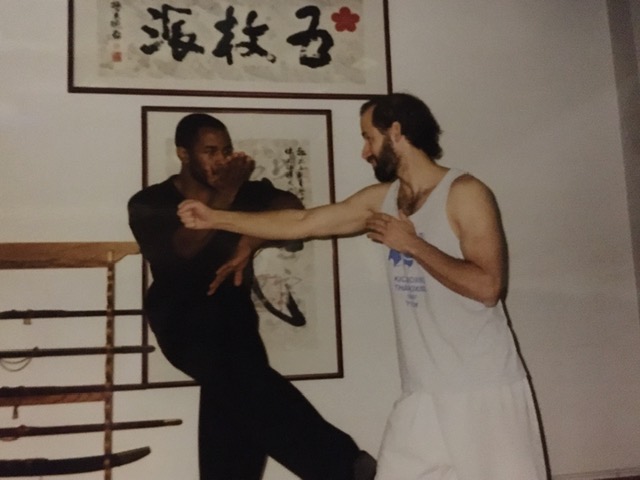