I have written on this topic a great deal already but it is so important that I must revisit this topic: Knife disarms, reality or myth? Life or death?

At IKI Krav Maga we do not advocate trying to disarm an opponent with a knife. During our Tour and Train program in Israel our Israeli Counter Terror experts explain that the only effective knife disarm is one bullet to the head and two to the body. At that point it is safe to "disarm" the attacker.

I recall a discussion with one expert in Israel. I am very open, the discussion took place in front of my students. I asked his opinion about knife disarms. This is not an ordinary soldier, this is a top counter-terror expert.He has been in many life and death situations.

I wanted his thoughts.

He answered, "Are you insane! This man woke up this morning with a plan to kill you. He is high on death, he is motivated, he is on adrenaline and perhaps drugs. You are just on your way home from a long day of work, at the office, or at a store. You are tired and unprepared. He comes at you, surprises you, and you think you are going to disarm him? Are you living in the movies? If you can block and get away with a few cuts consider yourself lucky."

This message has been echoed by every person I respect, from Itay Gil to the Israeli security leaders and instructors.

And yet this is still being taught at Krav Maga schools and seminars around the world. And I will be honest here; it makes me sick, and mad.

I am mad as hell and I am not going to be quiet about it. Too much is at stake.

I have read the words of these instructors (who teach knife disarms to the public). They write on their websites that they learned Krav Maga but found it 90% ineffective. Therefore they set out to analyze and take apart every technique and improve on it. Thus they have created a better Krav Maga. And yet when I look at it I see nothing that is new and true.

New and True? As a rabbi once said about a certain book, "it contains things which are new and true, but what is new is not true and what is true is not new."

The same is true of most systems of Krav Maga.

We are transparent, (very Israeli), we are in more than 35 countries. In every one of these countries our system is being tested daily. The reports come back to me, from police, military, and "ordinary" people.

We take questions and suggestions from all our members. They send us videos from other styles and ask for an honest critique. They send us footage from surveillance cameras. We deal honestly with all these questions. Thus we have an international system of checks and balances. Nothing is taken on faith. And when I explain a technique I explain why we do it this way and not another. If you disagree you are free to question it.

We are not afraid of being challenged. In fact many of our techniques have been improved this way.

Too high a risk

Knife disarms simply very risky. The chance of success is so low that the greatest student of Bruce Lee, Danny Inosanto, said the following truth, "Knife disarms are incidental if not accidental". In plane English, incidental; not important, if they happen they happen. Happening as a minor part or result of something else. Being likely to ensue as a chance or minor consequence.

Accidental means if the knife disarms happens accidentally, great. But if not, don't try for it, you may end up dead.

And yet I see footage from seminars where students are doing knife disarms. No one is stopping them, no one is warning them that they are developing habits that can get them killed!! Yes, killed.

And yet these teachers are allowed to teach Krav Maga. And I protest.

There should be more control, more regulation, like in Chile.

I say right now, here and now, that these instructors are irresponsible. I do not care if they claim to have served in the Golani infantry unit, or in some other combat unit. These units are not known here in Israel for Krav Maga. In fact the Israeli army is not known for producing quality Krav Maga instructors. That is simply a myth. (Please see other blogs where I discuss this at length).

Trying to disarm a strong, violent, motivated man high on whatever is simply not rational behavior. Why is this being taught at Krav Maga seminars?? 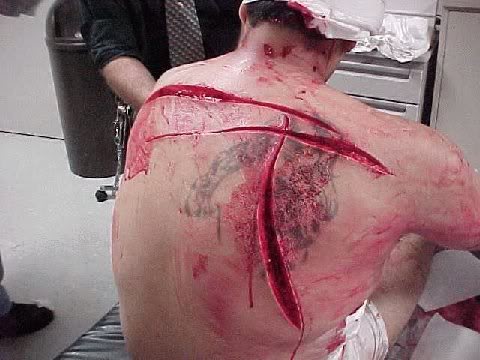 Sorry for this graphic image. Please keep this in mind when you attempt knife disarms, and reconsider. Do not learn your lesson the hard way.

Now lets progress to another point.

At these same seminars I see students, who after having successfully disarmed the violent but in this case complying attacker, stab the attacker to death.

Well now, lets think about that for a moment. Again, irresponsible teaching. In the unlikely event that you did succeed in disarming and controlling this individual, what gives you the right to murder him? Who appointed you judge and jury? Even Adolf Eichmann received his day in court, so did Hermann Göring . But your attacker can be stabbed to death without trial?

I know that in this country you will go to jail for life.

We had such a case. A terrorist came with a knife, he was disarmed, not with Krav Maga of course but by a team of counter-terrorist armed with rifles. (the true Israeli disarm). When he was under control, an amateur who was in the area, shot and killed this terrorist.

Now this is Israel where terrorists are dealt with very harshly, but this Israeli who shot the Arab terrorist after he was disarmed was sent for trial. He was tried for murder. We are a country of law and order.

And guess what? He was sentenced to life in prison. Once you have disarmed the assailant you may not kill him, you may not stab him, that is called murder and in most societies you will spend the rest of your life in jail for this crime.

And yet this is precisely what many Krav Maga instructors are teaching at seminars. And I say to you here and now that I firmly believe they should be disbarred and forbidden to teach Krav Maga. They represent in my opinion a clear and present danger to the public.

Our goal at IKI Krav Maga is to teach a practical, rational, system that can be used by all kinds of people, from Counter-Terror experts to out of shape civilians. It works for all.

ALL our techniques are tested full force, full speed, many many times over.

Other blogs on this topic

Knife Defense, Are you prepared?

Reality of the Knife