The IKI ranking system is divided into two categories; Belts and Instructor Ranks.

The two categories are independent. 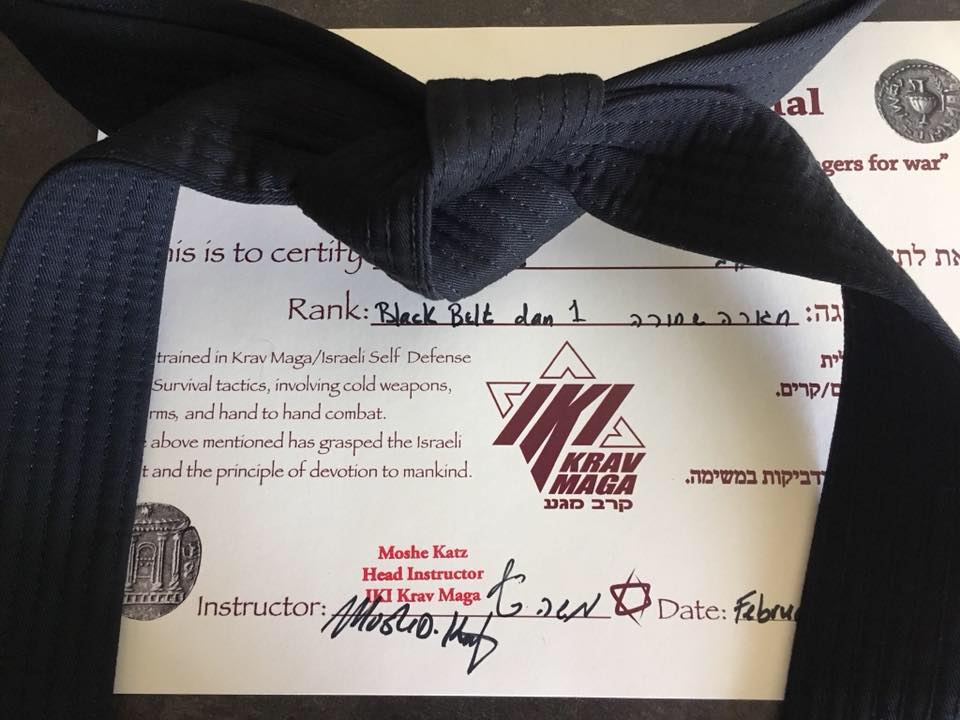 Belts are a rough estimate of your personal ability.

No rank, no exam, no score is a perfect indication of your ability. You will simply have to learn to live with that.

Unlike a score on a math or science exam, we do no have grades of 0 to 100. In martial arts you cannot earn an 87 for example. It is more familiar to the A, B, C, D, F grading system and at best it is only approximate.

As such several people will have the same rank but I can personally testify that not a two of them will have exactly the same ability. It is simply not possible.

This can lead to jealousy and frustration. Instead of enjoying and celebrating a new rank some students will with jealousy at another and wonder, "Why did he/she received a higher rank than me?" or, Why did someone received the same rank as me?

Some people do more than wonder; they openly complain and challenge the teacher. Some leave the organization in righteous indignation. Jealousy and anger can consume a person.

It is acceptable to respectfully ask, " I notice that others are ranked higher than me, Please let me know what I need to work on in order to move up to the next rank." Or, "What are you looking for in the Brown belt test etc. "and so forth.

I find student ranking to be one of the most difficult and least pleasant parts of my position. I use what I have learned from my instructors over the years plus what I have gained from my own personal experience as a teacher and a student.

What follows are a few stories. I hope our members and readers find them helpful in understanding the ranking process and the challenges it presents.

Two of my outstanding students were tested by myself and by my instructor for the rank of green belt. Both passed and were awarded this important rank. A green belt is a high rank and one to be very proud of. Most students never reach this level.

The students, one male and one female, were teenagers. They were as different as two students can be. The male was very tall for his age, strong and aggressive. During the testing he was praised by my teacher for his intensity. My teacher pointed out that when technique fails it is intensity that counts.

The female was below average height for a girl, but super talented. In fact during the free-fighting segment of the test she filled a larger male student with a judo throw and terrorized most of her opponents with her swift movements.

I was very proud of both of my students.

Within weeks both quit training, and ever returned.

I had no idea why and it was a terrible blow.

As I have maintained good relations with my former students (I recently attended the wedding of the female student) I have been in touch with both for many years. Eventually, each one on their own, felt a need, so many years later, to come and explain to me why they quit. Why they had left the training they had loved so much.

The male: I was terribly angry. How could you give her the same rank as me! I was so much taller, stronger, faster, I could clobber her any day of the week. I was so offended that this little girl received the same rank as me I simply could not continue. Now, as an adult, I realize how foolish I was.

The Female: I was offended. I had such skill, such finesse, I applied the techniques during actual sparring. I defeated boy. And then you give this guy the same rank as me simply because he is big and strong? I could not handle this insults and so I quit. I wish I had not.

There were several students, classmates of mine, who received ranks that I did not feel they deserved. I felt strongly that they were not ready for these ranks and I was frustrated that my teacher awarded them these ranks. However, I kept my mouth shut, far be it from me to challenge my teacher. I swallowed it.

Later on my teacher felt a need to explain to me. Perhaps he sensed my frustration. Perhaps he respected me as an important enough member of the dojo to deserve an explanation. He certainly did not owe me an explanation, but perhaps since I was already a teacher, and I was assisting him as well, he felt it was educational for me to hear his reasoning.

"This fellow here, he is actually dyslexic. In the time it takes you to learn ten techniques he can learn only one. I know he only did one knife technique for his brown belt test but for him that was a huge triumph.

And this fellow; Yes, he does not train as often as you do. It is because he support his mother, his grandmother and himself. He works crazy hours. He needs this in order to continue teaching at the school where is employed. He might not be up to your level but he will get there, but he must have that rank now.

And that fellow who just earned his brown belt, he is suffering from asthma. For him to last that long during the free-fighting session is a huge accomplishment. So he may not have fought so well but for him it is a major triumph."

My teacher, the so called "Bad Ass", the special commando tough guy, had more compassion, softness and understanding than I had ever imagined. He fully understood each person's individual circumstances; health, family, financial status, and took all this into account.

I was humbled but I learned a very valuable lesson now as a teacher. No one but me know that is behind a certain ranking decision. No one needs to know, it is private. I have earned that right just as my teacher did before me.

I trained hard, very hard. In fact I am convinced that no one at the gym trained harder than me. My teacher often pointed out that I was his most dedicated student. He used to say, "As certain as I am that the sun will rise tomorrow, I am equally certain that Moshe will be here on the matt."

I know I was not the most talented or gifted but no one worked hard, no one.

When it came time for black belt testing, I was not the first to be tested. Initially I was passed over. When I was finally tested there were others who were tested with me. One fellow in particular upset me. He was in law school, lived farther away and did not train anywhere near as much as I did. He popped in now and then, when he could, when he felt like it.

Yes, I admit, he was an outstanding fighter, so carefree. But he missed training sessions and then showed up like nothing had happened. He received the same rank as me.

How could this be!

Fast forward fifteen years. I am at Schiphol airport in the Netherlands, on my home after a successful Five-Day Krav Maga seminar. Waiting for the El Al Israel Airlines check in, I see him. Wow, that a surprise. And he is so friendly.

"What are you doing here? I ask.

He is here in Holland with a group of Israelis, they have just run the marathon. I ask him in Dutch if he has picked up any of the language, Nope, not a word. Hmm...

He asks me what I am doing here. I tell him that I have made a career of Krav Maga, earned the rank of 5th dan black belt (at the time) and that I am teaching seminars all over the world. He commented along the lines of You have always been such a hard worker, so dedicated, I am not surprised. (so he had noticed!)

And what about him? Is he still training? Did he move up the ranks, or still first dan black belt?

He could not even remember where his black belt diploma was. For him it is just something from the past.

As I was about to board the plane I was greeted with the pleasant surprise that I was upgraded to business class, first time this had ever happened to me. As I sat in my comfortable chair sipping on my Business Class drink my former classmate walked on the plane with his group. Seeing me seated comfortably in Business Class he said, " Good things happen to good people. You deserve this."

I felt ashamed. For years I was upset that we had received the same rank. I worked so hard I felt deserved a higher rank than him. My teacher in his wisdom always told me, "Moshe, your day of glory will come."

And it has. I just need to be patient, and continue to work hard.

The cream rises to the top. If you work hard and you stick with it and remain humble, your true colors will show and your day of glory will arrive. Do not waste your time being upset about the ranks of others. Just focus on your own training. In time your recognition will come. Lengthen your own line rather than trying to cut others down. Your day will come. 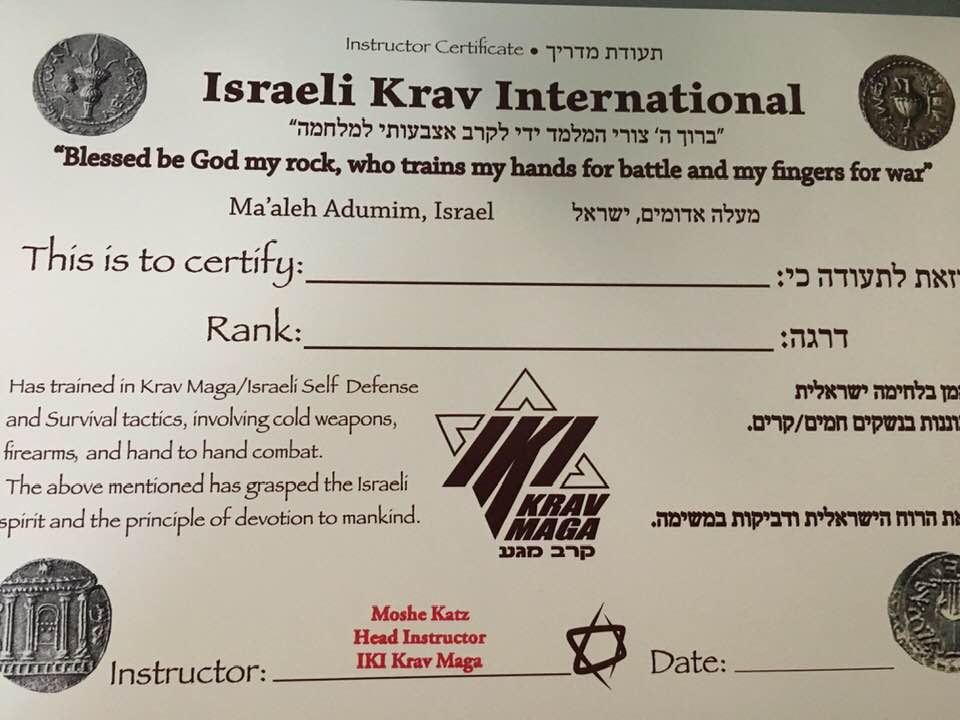 Question: What does a higher instructor rank give me?

1. Like all ranks, a higher rank is simply an indication of greater ability. It is for you to know. It is a personal accomplishment. Even if it has no effect on your career it is something that you know and you should appreciate. You worked hard and earned a rank.

2. If you are using the IKI ranking system, which as an IKI instructor you should be doing, then each rank gives you more of an ability to promote your students to higher ranks.

For example, Apprentice instructors can promote their students to yellow and orange belt. Beyond that they need to be tested by me, (in person or via video).

That answer is - None.

Or, the reverse: I am an Assistant Instructor, what level black belt does that make me? Again, the answer is, none.

You need to test for each category independently. It is like if you are participating in Kumite (sparring/fighting) and Kata (forms). You win third place in the Kumite free fighting tournament, what ranking does that give you in the kata tournament? The answer is None, you still need to compete in Kata, they are two different categories, they measure two different skill sets.

You may win fight after fight and take the first place trophy for Kumite but that does not automatically give you any rank or status in Kata. Similarly, a first place finish in the Kata category does not give you an automatic ranking in Kumite free-fighting category. These events measure different skill sets.

Can J K Rowling teach you how to write the next "Harry Potter"?, I do not know.

Being a great guitar teacher does not mean you are the next Jimi Hendrix, being the the great Jimi does not automatically mean you are a great guitar teacher. We all know that Hendrix was an amazing performer and guitar innovator, but was he also a great teacher? I have no idea. Would you want him to teach you to play? That would be pretty cool indeed but he might bein purple haze rather than focusing on your lesson. Different abilities.

Outstanding, outstanding explanation!! This should be required reading for anyone involved in any martial art, not just Krav Maga.